A Memory Shared About Yvonne

A Memory Shared About Yvonne

Upon the announcement of Yvonne’s death, many friends and fans shared their thoughts and memories of Yvonne.  This one was so touching and it is such a perfect story of who Yvonne really was, we felt we had to share it.

posted here with permission by the author

Yvonne Craig, My Own Personal Superhero

I am just destroyed right now over the passing of Yvonne Craig, who played Batgirl on the TV series in the 1960’s. And not because I was a fan of Batgirl. No, Yvonne was one of the brightest lights in our lives when my 25 year old wife Elaine was diagnosed with cancer.

While others may have admired her from the other side of the TV screen, I came to know her in a very real way. Words cannot express how much this one hits me.

Like everyone else my age, I grew up watching Batman. I saw the reruns in my little Massachusetts town right when I hit puberty and Batgirl was, along with The Bionic Woman, my teenage crush. Once she put on that purple suit, she owned me.

Many years later, after going to film school and saving all my money, I moved to Los Angeles with my wife and found an internship on a documentary about Rita Hayworth. I became good friends with another intern on the project, Christopher Carson, who would enlist me to work with him on his student film about dolphin abuses in the tuna and amusement park industries. The film would go on to win a number of awards and is, to this day, one of the films I’ve edited that I am most proud of.

One night, and I don’t remember how it came up, Chris mentioned that his mother’s sister was Yvonne Craig. I must have turned red knowing I was one degree away from my teenage crush. I told my wife Elaine the news and she reminded me that Yvonne was on my “List” of people I could get with if ever given the opportunity. My face grew redder.

When Chris graduated, he invited me to a graduation party at Yvonne’s apartment. On the way there, I was so nervous. My wife Elaine thought that maybe we should reassess the “List” and decide that it was something more fun in the fantasy world than in reality. That only made me more nervous.

I walked into her apartment in 1991 and there she was. She was older and she was shorter than I expected, but she was every bit as attractive as I had imagined. But the attraction wasn’t found in a skin-tight leotard. She glowed with a light from within. She genuinely glowed. Her smile was honest. Her laugh was deep and sincere. She told me stories about working with William Shatner and Adam West. She made sure I ate a lot of food because she knew I was a poor intern.

She asked my wife Elaine and I about our young marriage and instead of being skeptical about our deciding to get married after only two weeks, she embraced it. She told me she could feel the love between us. She told us, “you two are gifts to each other. Open them every day.” I left more in love with her than I had ever been as a pubescent teen.

A couple of years later, Elaine started to complain of pain in her hips. After some tests, we found that she had a malignant tumor which had spread to her lungs. The prognosis was not good, even though she was only 24. I let friends know that we would be moving back to Massachusetts after her first round of chemo. One of those people was my friend Chris Carson.

I worked during the day to raise money for our move, and spent late nights with Elaine in the hospital. I was sleeping 3 hours a night. It was the hardest time of my life.

A few weeks later I got a call from Yvonne, asking if there was anything she could do to help. I had only ever met her once and I was a nobody on the Hollywood food chain, so I was shocked by the call. I didn’t want to impose and told her things were fine. She correctly refused to believe me and said she was coming over the next day and I better have things for her to do.

She came by a couple of times a week from that point on, driving an hour and a half to get to our tiny apartment. She did our laundry, she cooked us meals. She released me from the unimportant things I shouldn’t have been worrying about. When I told Elaine about it, she sighed. “How many other cancer patients have a true superhero working for them?” she said.

The hardest part of her chemo came around Christmastime and Yvonne offered to come over and wrap our Christmas presents for me. She spent hours wrapping gifts while I worked on paying our bills. We talked as friends and I will always remember her, truthfully, as one of the sweetest women I have ever known. Every syllable threw a spark into my soul. As she finished wrapping the presents, I saw her rubbing her wrist and asked if she was okay. I found out later she had carpal tunnel syndrome and she was in pain throughout the entire night.

She didn’t care, because she apparently cared about others more.

One day she handed Elaine a sequined baseball hat with African designs on it. She said trumpeter Dizzy Gillespie had given it to her. She said to Elaine, “I love this hat and I want you to wear it when you feel like you don’t have enough music in your heart.”

Elaine with the music inspired hat given to her by Yvonne.

We moved back east and Elaine passed away at the age of 26, one year later. She wore that hat often and kept a photo of Yvonne as Batgirl near her bedside throughout her illness. Yvonne was the superhero on her side.

A few years after Elaine passed away, I returned to Los Angeles and reconnected with Chris. We worked on another project together and at a premiere screening, Yvonne attended. She saw me first and threw her arms around me. She had tears, but she also had a huge smile. I told her everything she had meant to us and she reacted as if I was overdoing it. To her, she had only acted as any human being should.

I loved Yvonne Craig. As a teenager who fell for the mythical creature in the spandex suit, and as an adult who fell for her most loving heart.

Many years went by and I eventually remarried. We gave birth to a spirited daughter who, by the age of three, had become a big fan of superheroes. I told her I knew the real Batgirl and she asked me, “Is she really a superhero?”

I told her she was.

Chris has told me that he has shared videos of my daughter with Yvonne, especially one of my daughter dressed as Batgirl, pretending to climb sideways up the side of a building. Yes, my daughter had figured out that even mythical superheroes sometimes find ways to create magic in the real world.

It is not a lie to say that I have thought the world a brighter place because I knew that Yvonne Craig was part of it. Look at images of her smiling and you will see what I mean.

Rest in peace, Yvonne Craig. Aunt of Christopher Carson, hero to millions, glowing friend who washed my towels and gave us a hat. That last part was one of the most beautiful and selfless gifts I’ve ever received in my life.

You can also check out him out on IMDB. 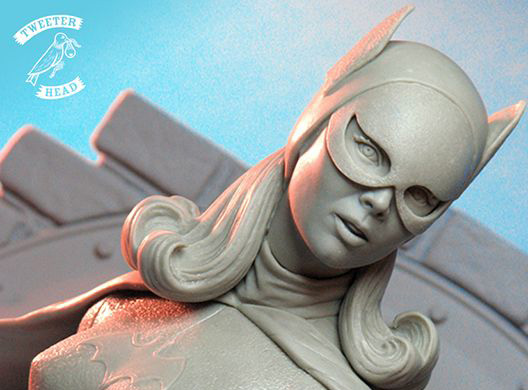